The Secret History of a Bestseller

Collaborating on a manuscript with James A. Michener

As the time approached for our joint sessions on the manuscript, I knew Michener and I faced a long, hard trek. Since Jim hadn't seen my line-by-line reports, his estimate of the task ahead was more rose-colored.

When I'm finished the last page of Chapter XV, you will have to come down here for a two-week uninterrupted stint during which we'll go over chapter by chapter, weighing all the criticisms and suggestions. I judge we should be able to handle about one chapter a day, leaving aside the big areas that I can wrestle with separately after you've gone.

Our work would take from September 8 to December 21, 1979, almost four months trekking across a thorn-studded landscape with Van Doorns, Saltwoods and Nxumalos to reach Vrymeer, the lake of freedom!

In his notes on the manuscript of The Covenant, Jim has this to say about our sessions together:
Errol Uys, a South African and an expert writer on South African affairs, did a prodigious amount of editorial work, partly to satisfy his own recollection of events, partly to correct my errors, or sometimes, what he conceived of as my errors. He was very good. We had violent arguments on points, some of which I knew more about than he did; but usually he had a keen sense of what should be done and was invaluable.

We read every word of the novel aloud together and then all over again separately, working from 0800 till 2300 for weeks on end. He interleaved each chapter in detail, sometimes unnecessarily I thought and in so doing developed strong feelings as to what should be eliminated or improved or clarified. He was, I believe, the most thorough editor I have ever worked with.

I'd been editor-in-chief of Reader's Digest in South Africa and held various writing and editing jobs for a decade and a half. I knew the joy of a clean manuscript landing on my desk, all too rare as any editor knows. I'd also rolled up my sleeves for massive surgery, sometimes the total rewrite of a story. Nothing I did before could compare with my work on The Covenant which I believe was unique in Michener's relationship with his assistants, made so by my intimate involvement from the conception of the novel.

I was awed by Jim's legendary drive and discipline in turning out the first draft of 1,634 pages, month by month, chapter after chapter, the latter not in sequence. - One of the first big blocks he wrote was the chapter on Apartheid, set in the final decades of the story. - Between September 9, 1978 when we met after his return from South Africa and December 16, 1978 he finished the original Chapter 1 (Diamonds), Chapter II (Near-Man), Chapter XIII (Apartheid) and Chapter IV (Bushmen/San.) Eight months later at the end of August 1979, the fifteen draft chapters were complete, essentially a chapter a month, several running to one hundred and more pages.

Now we sat opposite each other on the sun-filled porch of the cottage on Broad Creek at St. Michaels beginning our work on the manuscript. The first chapter we picked up for review was the story of Great Zimbabwe in the mid-fifteenth century, starting with the boy Nxumalo at his village on the site of the future Vrymeer in what would be the Transvaal and telling how he journeyed to Zimbabwe and its mighty stone citadel. In his story, Jim introduced a character called The Collector. He was an old man who traveled south from Great Zimbabwe to Vrymeer, coming for an annual tribute of ivory tusks, lion skins and rhino horns and with orders to recruit the chief's son for royal service.

There was a fundamental flaw in this idea, which I discussed in my research report: "In all sources I checked, and there were many, not a shred of evidence to suggest that Zimbabwe hegemony extended this far south... The picture given of a collector coming to exact tribute just doesn't have any basis in history/anthropology."

I remember sitting across the table from Jim choosing my words carefully for I was both nervous and respectful. Of course, Michener was a pro long accustomed to the barbs and stings of blue pencil men, an accomplished writer of twenty books, including the four epic sagas of Hawaii, The Source, Centennial and Chesapeake. I'd done my homework and was well-armed but still felt that I was entering a minefield.

Step by step, I laid out my objections to "The Collector." I can still see the steely look on Jim's face, and the charge that came into the air between us, like the electricity that presages a thunderstorm on the African veld, when day turns to blackest night and lightning detonates across the sky.

There was no violent argument in this first clash over the Zimbabwe chapter. I read the sections aloud and told Jim why the pages wouldn't work. His first response was to leave them for later and move on with smaller errors more readily corrected. We did this but it soon became evident that the drastic changes needed for The Collector would impact the story line. 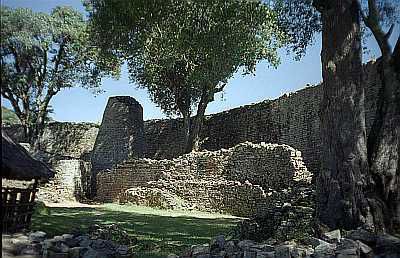 How the Old Collector became a Seeker

We went back to the drawing board. I proposed that "The Collector" become "Old Seeker," an ambassador at large, an explorer, a seeker, who takes the chief's boy to Zimbabwe, not as satrap's son but a young man out to discover one of the wonders of his world in 1454.

Embedded in the new story line were two important markers for the novel, one firmly establishing the Nguni forerunners of South Africa's tribes in the Transvaal, the second foreshadowing the golden treasure of the "Ridge of the White Waters," the Witwatersrand.

In 2003, author Stephen J. May contacted me for his new biography, Michener: A Writer's Journey (University of Oklahoma Press, 2005,) asking about my work on The Covenant. A part of my response to May dealt with overcoming problems like the one encountered with "Old Collector" that no degree or editing or re-writing could fix:

As the roadblocks mounted and our revision slowed to a crawl, there came a morning when I was left alone with one of these unusable sections. I knew what I had to do but remember sitting there and worrying about Michener's reaction: Would he consider it grossly improper and impertinent were I to write original material for him? I wasn't thinking of one or two re-cast paragraphs but sections of narrative and dialogue running to several pages.

I put aside the questions that dogged me and drafted the new pages. When Jim returned, I gave my work to him. He went into his study and after a while began to type...

And this is how we continued to deal with material I wrote, Michener taking the items with little comment and typing them up for insertion into his manuscript. Some drafts didn't come back to me, but many were returned, as I needed them for working on later sections of the relevant chapters.

Here, I have chosen a small sampling of my contributions to James Michener's manuscript. Working notes are from four chapters:

(XII) The Achievement of A Puritan

Mfecane - The Crushing of King Shaka of the Zulus

Mfecane, a Zulu word meaning 'The Crushing,' depicts the rise of chief Shaka and the expansion of the Zulu kingdom in the early 19th century.

The problem I found with Michener's original draft concerned the image of a brutal Zulu society and the outright cruelty of its ruler:

The whistling anecdote is confusing... it relates precisely to the sort of action imputed to Shaka in later years. There is very little evidence of such cruelty prior to this.
On the contrary, Ritter stresses: "When the time came for the passing of Shaka's father in 1816 it marked the end and beginning of two distinct periods in East Nguni history." Certainly malefactors were slain, but the transgression would have to be far more serious than this. "Whistling" etc. links with Year of Mourning slayings after Nandi's death. And, so, too, the mutilation. (Ritter = E.A. Ritter, Shaka Zulu)

Addressing the chief of the Sixolobo clan as... "Elephant-who-causes-the-earth-to-remble": Respect for authority, from childhood up was, and is, at the center of Zulu society, and they may well have addressed him as such but again, strongly suggests Shaka/ Dingane era.
The whole impression given here pitches us into that period. Ritter: "The art of war, prior to the wonderful efficiency later attained by the military genius of Shaka, had remained throughout in its most unsophisticated form. For on rare occasions disputes did arise between clan and clan, and peaceful efforts providing no remedy, recourse must be had to arms."

Oxford History of South Africa: "From the beginning of his reign Shaka had been a more capricious ruler than the traditional Nguni chief often ignoring the advice of his councilors and ordering the killing of subjects who displeased him for any reason."

Oxford, (p122, Vol.1) depicts a far less "barbaric" society. In fact, looking at the southern Nguni "a society in which disputes were settled in court, trade regulated, and the power of the chief himself bridled . But the records show that there was a lively belief in witchcraft and sorcery; those accused were often tortured to obtain a confession, for the life of the victim was held to depend on such confession, and those convicted were killed.

These pages ignited one of the "violent arguments" Jim recalled in his notes about the manuscript, for he was adamant about a dramatic scene-setting opening for the Mfecane chapter. I saw a solution in making the story turn on witchcraft with a diviner smelling out the evil brought by Nxumalo's father. The divination provided an important foreshadowing of a scene in the chapter on The Voortrekkers, when the Voortrekker leader Piet Retief and his party meet their deaths at the hands of Dingane.